Laravel vs django the ultimate battle of champions

Laravel and Django both are really awesome frameworks. This brief post on Laravel vs Django will help you to choose the best framework for your next project

When it comes to choosing the back-end framework we always get stuck on what to choose. Laravel and Django are one of the most popular frameworks for back-end development. However, both of them have some great advantages and some major disadvantages too which can lead to a critical problem in the future. So in this post Laravel vs Django, we will compare both in-depth, and finally, we will see who wins.

Laravel is one of the most popular PHP frameworks. I have found many peoples who used to call PHP a spaghetti language. The way a PHP script can contain HTML, CSS, and JavaScript makes it a little confusing to read and understand. However, it totally depended on the programmer and their way to organize the code into smaller modules. Even a beginner may feel a little overwhelmed to organize the project structure.

Laravel makes the task really easy to develop web applications with PHP. It follows the purely OOP (Object Oriented Programming) approach and provides a great MVC (Model View Controller approach). The huge list of awesome features it provides makes Laravel the most popular choice for many web developers. We will see a glimpse of the most popular features among them in this Laravel vs Django post.

Django is one of the mature and most popular Python web frameworks. Python has always been popular among developers for its easy to use nature and broad scope. You can use Python for almost anything, anywhere with ease. That make’s it really popular and a top competitor in the job market.

Django follows the MVT (Model View Template) or MVW(Model View Whatever) pattern. Many popular websites like Instagram, Pinterest are using Django at their back-end. On the other side, it’s much secure too so even Nasa is using Django on their official website.

We have already written a post web development with Python Django where you can find more in-depth details. So if you are interested in Django then click on the link and take a look at that post first.

I have found many beginners get confused at this point. As both Laravel and Django are the best frameworks for PHP and Python respectively. There are a bunch of things one should take in mind before taking the final decision. It is quite hard to get the ideal information at a glance.

So I have made a list of contents where we will compare Laravel vs Django. Then we will finally check out which is best for you.

When it comes to choosing a new framework we always want to know how popular it is or how many websites are using it. So let’s start with that first and see how popular Laravel and Django are. 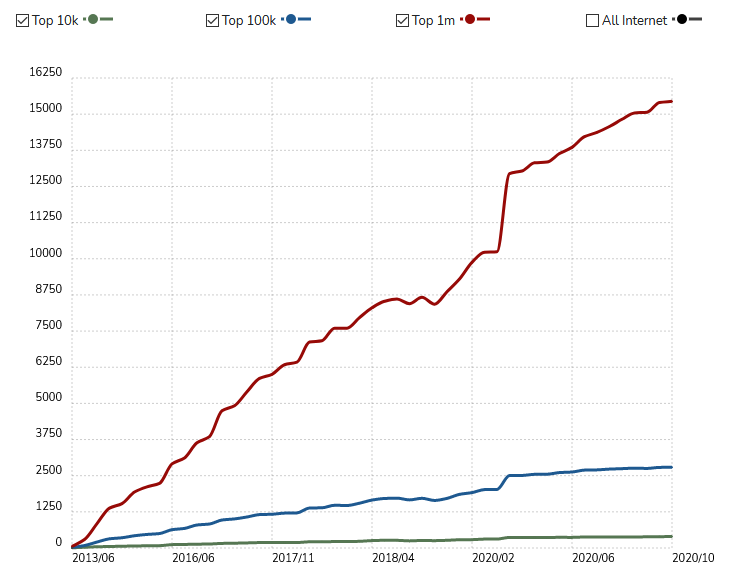 As you can see from the above chart Laravel is really popular and more than 15000 websites in the top 1M are using Laravel.

Some of the most popular among them are Laracasts. Even the official site of Laravel is made with itself. 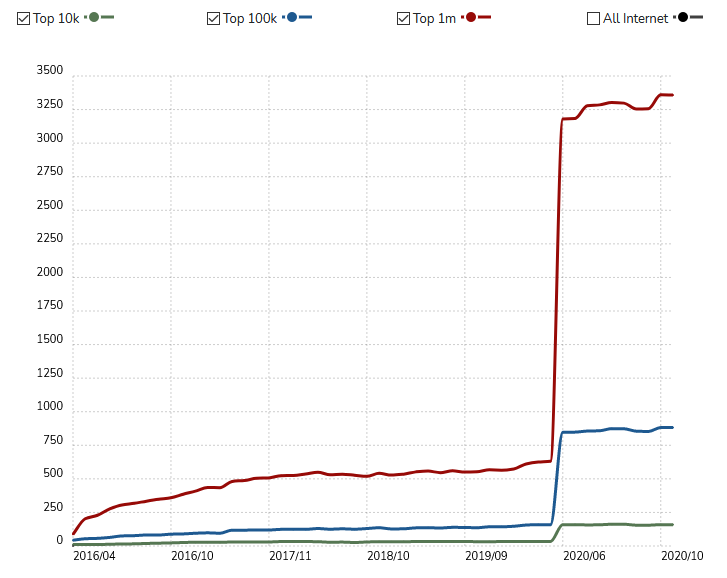 Django on the other hand is used widely popular among developers like Laravel. The main difference here is the programming language. You can find PHP developers anytime but finding a Python web developer is a bit hard.

This particular keypoint depends on various things. Like server ram, processor, level of optimization, and much more.

So in order to make things simple, I have used TechEmpower to compare the performance of both frameworks.

The result is here, Laravel is a bit better in terms of performance but you will rarely manage to find it in production.

It's a tricky point, as everyone has their own point of view. So you will never know exactly which one is easier for you.

Let's talk about the most important features Laravel and Django provides. Then move ahead and decide which one is easier.

Routing is one of the most important things about back-end development. Almost every back-end framework provides its own routing structure.

However, Routing seems to be quite harder in Django. Many Django lovers may disagree but it's the truth. As you have to know about regular expressions first.

On the other side, Laravel provides a simple way to create routes which we find really useful. Just call the method you want to use like get, post, patch, delete. Supply the route URL and view or controller method. That’s all it will simply route you to your desired view.

Let’s, justify our opinion by showing a sample code screenshot. 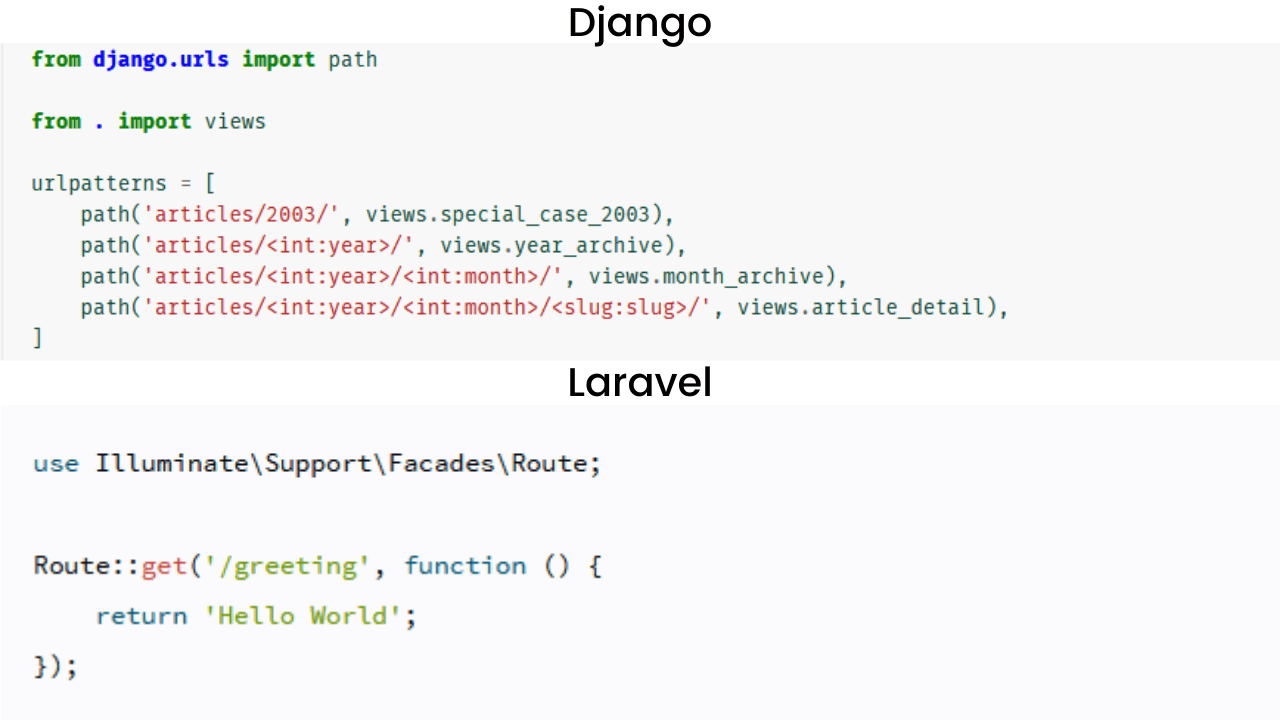 Laravel provides an easy way to create an API. It returns data in JSON format by default for every database query.

In addition to that, you can even separate your API endpoints by placing the API routes in a separate file. You may have faced issues with API data formatting. Laravel made this simple by creating Resources. You can simply choose the data you only want from your API.

On the other side, Django doesn’t provide some inbuilt structures to create API. However, you can create it by yourself easily or can use Django REST framework.

Templating is really easy with both as they are providing a great templating engine.

Laravel provides Blade which is really powerful and fully featured. On the other side, Django comes with Jinja. Jinja is also quite powerful. However, in terms of features, it's far behind Blade.

You can use loops, conditions, and much more inside a view. Templating does not look quite different so I am not adding any images for that.

The project structure is neatly defined in both. In short, it’s quite easy to manage multiple apps with Django. It provides a separate parent directory for each app under one root project.

On the other side, Laravel doesn’t provide the same. Generally, Laravel architecture is perfect for mid-scale projects or where is no need for multiple apps. However, you can manage structures like Django to maintain multiple apps with 3rd party plugins.

The default folder structure looks like below for Laravel and Django.

Actually, the above section of our Laravel vs Django comparison depends on the project level. So both are great in their own respective places.

In our Laravel vs Django comparison Models and migrations, section plays a vital role. As it's the entry point of our project no matter which framework we are using.

Models are used to create table structures, the relationship between multiple tables within a database, creating special methods to retrieve values the way you want.

Basically Django and Laravel both follow ORM (Object-relational mapping) inside models. However, there’s a little difference in both which we will specify in the next para.

Once you migrate the model it will automatically generate an SQL equivalent inside the migrations folder.

However, Django uses a single file to specify everything related to the model. In simple words, you have to define everything like how you want to retrieve values, the table structure in a single file. Which may feel overpopulated for large tables.

Laravel provides 2 different files to separate the table structure and the way we want to interact with its values. One of them is a model file which is stored in the app folder.

Inside the model, we can define the methods and specify the way we want to interact with data.

On the other side inside of the database/migrations directory, you can find the PHP files to define the table structure.

However, both of them provide a convenient way to work with the database. While we have found Laravel to be better when we are working with large data sets. As it provides a better way to separate things.

Let’s see how to create tables with Laravel and Django with a code screenshot.

An admin panel provides a great way to speed up the development. Django provides an easy to use admin panel which can be activated with a single command.

However, it comes with a basic layout and minimal design so it may not look that catchy but it works great. Simply create a superuser and register the models which you want to manipulate via the admin.

Don’t worry if you are not satisfied with the admin panel style. You can configure it in the way you want or you can implement any 3rd party libraries too.

However, we like the predefined style the Django admin panel provides. It's really excellent when you are working on a small project and time is a crucial matter.

Unfortunately, Laravel doesn’t come with an admin panel. So either you have to use a 3rd party library or have to create one from scratch.

I have found Laravel admin to be awesome. However, if you don’t like it then follow Coders Diaries and wait a while. We will write how to create a custom admin panel with Laravel soon.

No matter which framework you choose make sure it has a great job market. We will see the number of currently available jobs on top freelancing sites and let’s see who wins.

Upwork is one of the most popular freelancing marketplaces so we will start with Upwork.

As you can see from the above image there are currently 720 active jobs available at Upwork. It’s really a huge number for any framework.

However, we can’t decide its job market by Upwork only so let’s check out at Freelancer too.

As you can see 176 jobs are founded with the keyword Laravel. It’s really amazing that you will never have to worry about jobs with the knowledge of Laravel.

Now let’s see whether Django can beat Laravel in terms of the job market or not.

Unfortunately, Django seems to have fewer jobs than Laravel. However, Django has a good job market too but not as much as Laravel.

The above stats are taken in December 2020.

When it comes to developing something big a front-end framework plays a great role. Whether it’s a CSS preprocessor or JavaScript framework. In this section of our Laravel vs Django post, we will see the different front-end tools available for us to work with Django and Laravel.

There are many great JavaScript frameworks available that can shine your project. If you are confused with what to choose as your front-end development framework. Then you must check out VueJS, ReactJS, Angular, and Svelte.

We have learned about a lot of things of both worlds, Laravel vs Django. Both have their own pros and cons. So if you are a PHP developer go with Laravel and if you are a Python developer choose Django. In the end, it does not matter what tool you use but what you make with that matter the most. Hope you have liked this article and it answered your queries so far. Feel free to share your thoughts below in the comment section.

Both are good in their own ways. I believe Django is gaining popularity slowly. Planning to learn Django.

Yeah, Django is becoming popular and also I feel Django is quite easy to learn. Any pro Django coder here?